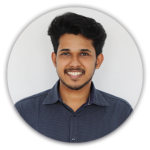 Christy Babu Lukose working as a faculty of Animation. He has proven his expertise in the field of Animation, Designing and Motion Graphics. The exposure to different fields through freelance and other projects adds to his experience. He has also secured first rank in Animation at MGU in 2015-2017 Batch. He won a State level Award for Best VFX for the documentary ‘Oru Chakka Kadha’, which was conducted by the FIB, Govt. of Kerala. He has to hi credit of 7 years Freelance Experience in Designing, Animation and Motion Graphics.